Richard Plugge and Merijn Zeeman are each other's sparring partner

"Merijn was a modern coach, so promised the stories I heard and read about him. Progressiveness was something we desperately needed. At the time, the coaching of cyclists lagged far behind that of other sports disciplines. In fact, in cycling there was almost no coaching. In other teams, that was starting to change. It was necessary that we also approached our training program in a more systematic and scientific way. And that we had a coach who could do that. In the first conversations with Merijn, it quickly became clear that we shared the same vision. He also had a people-oriented approach to sport, whereby the athlete should be central, not the sponsor.

He joined our team less than a month before, when Rabobank ended its sponsorship. For our team, where there had always been enough resources and where that was infinite for all team members, it was suddenly no longer certain whether we would still exist the following year. There was uncertainty and dissatisfaction, which led to some wrangling. In addition, we had the challenge of finding new sponsors, at a time when we did not exactly have a good reputation. Plenty of dilemmas, for two managers who had only recently come on board. We immediately learned what we could gain from each other. Merijn was clearly a go-getter, he could also have opted for security.

In a sparring partner, I look for someone with whom I can sketch out different scenarios. What is the consequence if that happens or if we make that choice? It is important that such a person can think out-of-the-box, so that you sometimes break through the fixed circle and so that they can surprise you with other insights. It must be someone who understands the subject. This means that for some situations you need a different sparring partner than for others. For private situations I call in a coach, when it comes to the team I exchange thoughts with Merijn. And conversations don't always have to be serious. It's great if you have the same sense of humor, so you can have fun. I consider most sparring partners as friends.

Trust is the most important thing. There must be a safe environment in which you can tell each other the truth. So that you can also enter into difficult conversations and, if necessary, identify painful areas. I expect Merijn to keep me focused on the human aspect; I help him to be more businesslike. In 2015, the division of roles was the same. We were on the eve of a major reorganization and I invited Merijn to my home. We had both done our homework, which partly consisted of collecting companies of which we thought: those have a strong story. We zoomed in on the strategies of Nike, Ikea and PSV, which we also saw as good examples. That afternoon we thought about how we could make our organization strong enough to win over sponsors again. What does our team - at that time still Blanco Pro Cycling - stand for and where do we want to go?

I make plans quickly. I have an idea and in my head I have already gone through all the steps necessary for that. I know how important it is to take your people with you. But Merijn is much stronger in doing that. At home I gave direction to the goal; I outlined the structure for a strategy, which would be guided by core values. Getting all the team members to co-write that and then sign it was Merijn's idea."

Merijn was the team manager at the Skil-Shimano team, when he switched in 2013 and became sporting director at what is now Jumbo-Visma. Shortly after taking office, he faced a seemingly impossible challenge: delivering sporting performance, with minimal resources and an organization where uncertainty reigned supreme. 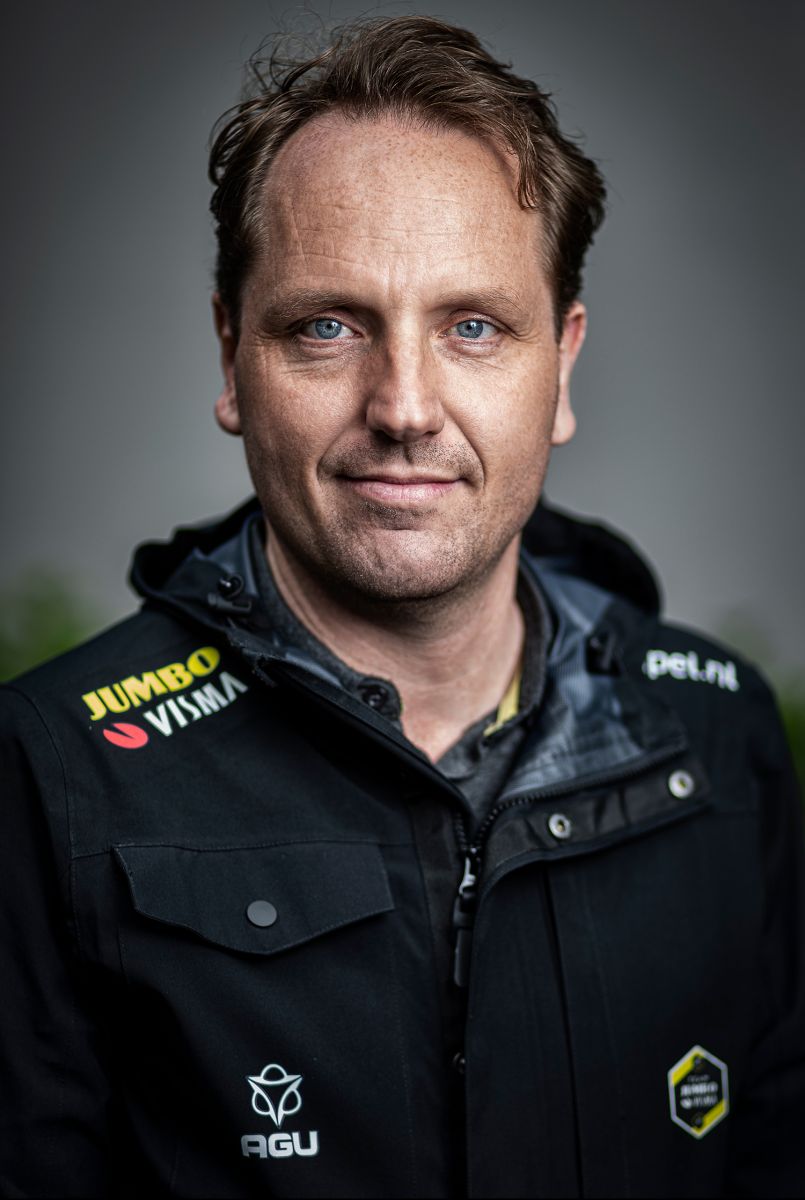 "If your partner stands tall in times like these and you continue to have support for each other, you know that it will be the same in subsequent situations. Richard and I actually never agree directly. Extensive discussions in which you can both say lles, ensure that you have properly exposed all sides before going in one direction. As long as there is respect and you give criticism to help the other or the organization further. Only when we agree with each other should we start to worry. As long as there is internal criticism, we can continue to grow and our team will continue to do well.

I naturally focus on people and relationships. If I didn't have Richard next to me, I would get stuck in that human corner too long before decisions would be made. He brings me back to the task at hand and helps take steps. I could give a colleague endless new opportunities. It's nice that I always want to inspire and get everyone on board, but there's a limit to that when your team consists of one hundred and fifty people. Now I divide my energy and know that it is also good if I have managed to inspire not everyone, but a large part of them.

Well, even that was a challenge, in the years after 2013. We had some short-term sponsorships, which brought in some money. But contracts could only be renewed for two years, and the tension on the floor was something everyone felt. Getting people on board when there is so much uncertainty proved to be extremely difficult. Richard and I decided that we needed to put a dot on the horizon again. We decided to make a strategy, including a common goal: in ten years we would be the best team in the Netherlands.

We brainstormed about the question: what will the sport look like in ten years? That we are dependent on sponsors was a foregone conclusion. Cycling is 99 percent commercial. If we wanted to think about the future and have more security, we had to find a long-term sponsor. For that, we needed an organization that appealed to the general public and that transcended top-level sport.

At that time - the right to exist of the top team was not even certain - we decided to set up a youth academy. A talent development program for children and young people would contribute to our reputation on the one hand, but especially to our ambition. With self-trained cyclists, the chances of winning are greater.

By involving all team members - athletes, but also coaches, physiotherapists and other staff members - in the creation of the strategy and the final goal, it was also really everyone's goal. That still gives a lot of security and allows us to make quick decisions in difficult situations. Is one of us in doubt? Then the other will find the answer in that strategy. That's how we keep each other on track. Back to basics: where do we want to go?

Last year during the Tour de France we were very close to our big goal. Many races had been cancelled due to corona; the Tour would be our chance. We came very close to winning it. The greater the disappointment that it just didn't work out. After that, I decided not to make racing my ultimate goal, but to focus on my daily work. The contact with colleagues, making plans together and having an impact on the development of people. The beauty of that approach is that, in that perspective, the goal is not complete if we do win the Tour this year. Then there is still plenty to develop and improve."

'Without Richard, I'd be stuck in that human corner for too long'